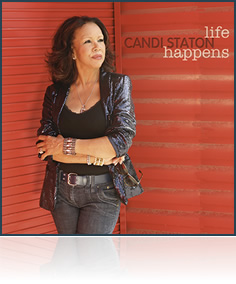 Soul music legend Candi Staton’s third foray into Triple A and Americana music, finds her reuniting with legendary FAME Records producer Rick Hall who produced her Grammy Award nominated early ’70s hits such as “Stand By Your Man” and “In The Ghetto.” The 14-track set (the physical CD features 15 tracks) paints the arc of a romance from its beautiful beginning to its bitter end. The hard-hitting songs about life and love range from country rock and southern soul to low down blues. The album opens with “I Ain’t Easy to Love,” a raw and thrilling collaboration with John Paul White of The Civil Wars and Jason Isbell of the 400 Unit. There are country-flavored tunes such as “Go Baby Go” and “Even the Bad Times Are Good.” There are bouncy contemporary Blues tracks such as “My Heart is on Empty” and the scorching “Three Minutes to a Relapse.” There’s soulful social commentary on “Have You Seen the Children?” and “A Better World Coming.” It all closes on a pulsating funk note with “Where I’m At.” It’s Candi Staton at her best and that’s just how life happens.